Save up to £200 per person on selected departures

In Sanskrit ‘Sri Lanka’ translates as ‘resplendent island’ but, before its modern name and evocative ‘Ceylon’, this country was known as ‘Serendib’, inspired through the 18th century writings of Horace Walpole the word ‘serendipity’ - the fortunate discovery of unexpected pleasures. This latter description is perhaps the most apt, as visitors to this teardrop-shaped Indian Ocean island may happen across magnificent fortresses atop mountains of rock, ancient capitals in the midst of dense forest land, cool hillside villages producing the world’s best tea, elephants roaming beautiful national parks, and gentle reminders of a British colonial past.

Plus all these benefits: 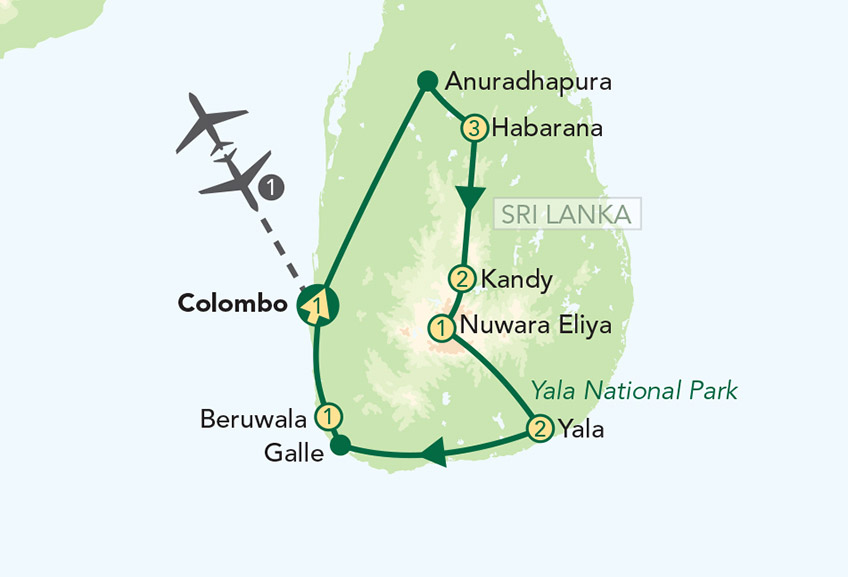 On arrival at Colombo we transfer to the Gateway Hotel (4T). This flourishing seaport is Sri Lanka’s commercial centre; a curious mix of eastern tradition and western sophistication. Our afternoon tour includes a visit to the fort built by the Portuguese and also an exploration of the buzzing Pettah bazaar district, where the streets are crammed with stalls and shops.

This morning we head north to Anuradhapura, ruled by the Sinhalese Kings for over 1,000 years. Star attractions include ancient Buddhist shrines, dagobas (bell-shaped memorials) and pokunas (stone water tanks). We also visit the sacred 2,000-year-old Sri Maha Bodi tree, before continuing our journey to Habarana. Here we stay at the Cinnamon Lodge (4T+) for three nights.

After breakfast, we visit a typical Sri Lankan village for a fascinating introduction to local culture and indigenous farming practices. Further adventure awaits in Sigiriya, a 182m rock plateau on which the 5th century ruler, Kasyapa, built a fortress and palace. The spectacular ‘lion rock’ fortress stands majestically over the lush green jungle surroundings, whilst carved in a niche in the rocks are the famous frescoes of beautiful women.

Today you are free to enjoy the beautiful surroundings at the charming Cinnamon Lodge. Or perhaps you may like to join our locally-booked optional excursion to Polonnaruwa. The glamour and wealth of a bygone age are evident in Polonnaruwa, built in the 12th century by King Parakramabahu. The remains of the King’s Palace include shrines, temples, dagobas and the Gal Vihara.

Today’s tour takes in a splendid visit to the serene Golden Temple at Dambulla, named for its gilded interior. Marvel at the recumbent figure of the Buddha hewn from solid rock and explore each of the five magical caves that comprise the shrine. We stop at a spice garden before reaching Kandy, last capital of the ancient kings', which nestles amongst low hills looped by the Mahaweli River. The evening is spent at leisure at the very comfortable Cinnamon Citadel Hotel (4T), our accommodation for the next two nights.

This morning’s tour reveals the scenic wonder of the gorgeous Royal Botanical Gardens where you can admire stunning flora and fauna. The afternoon is at leisure, but you may wish to take an optional excursion to the Elephant Sanctuary at Pinnawala, where orphaned and injured elephants are rescued and lovingly cared for. This evening, watch Kandyan dancers perform the enchanting national dance of Sri Lanka before continuing our journey to the sacred Temple of the Tooth.

We continue to Nuwara Eliya, built during the 19th century in an architectural style mimicking that of an old English country town. This famous home of Ceylon Tea is set 1,900m above sea level, at the foot of Mount Piduruthalagala. ‘Tea country’ Victorian and Tudor style homes line the pretty blue lake, adding to its charm. Tea lovers will be in their element on a fabulous tour to a tea plantation, where tea workers, or pluckers, pick each delicate leaf by hand. See the entire manufacturing process, from grading the tea by quality and size through to its final preparation. After relaxing at our night’s accommodation, The Grand Hotel (3T+), we head to the wonderful Colonial Hill Club for High Tea.

Our journey continues to the Elephant Transit Home in Udawalawe. Unlike many other sanctuaries, this home rehabilitates orphaned and injured elephants until they are strong and old enough to be released back into the wild. We continue to Cinnamon Wild Yala (4T), where we stay for two nights.

We rise early for our safari in Sri Lanka’s best known national park in search of the elusive Sri Lankan leopard. Even if we fail to catch a glimpse of this majestic predator, there is much else to see, including elephants, buffalo, monkeys, deer and crocodiles. Relax at leisure, or perhaps join an optional evening bird trail with an expert local guide.

The Old Town of Galle, now a UNESCO World Heritage Site, is the best example of a fortified city built by Europeans in southern Asia. The Portuguese first took control of the city in the early 16th century and began the fortification process, only to surrender it to the Dutch East India Company around 150 years later. The Dutch built substantial ramparts and walls, which are still standing today, and the British, who later controlled the country, left them intact and unchanged. Following our short tour we head to Beruwala for an overnight stay at The Cinnamon Bey Hotel (4T).

Today we transfer to Colombo Airport for a scheduled SriLankan Airlines or Emirates flight via Dubai, to London Heathrow or Gatwick Airport. On arrival you will be met and guided to your Titan vehicle for the journey home.